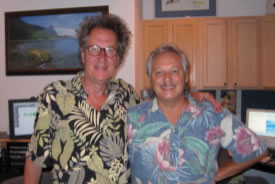 Dave Louis and Academy Award winner Geoffrey Rush are all smiles after a four hour ADR session for “The King’s Speech” at Audio Images Kauai. Tom Hooper directed the session via a phone patch from London, England.

Debbie Grattan – Professional Female Voice Talent: Dave, we’ve known each other a long time, but I don’t know if I’ve ever heard the story of how you got started in the business as an audio engineer and producer.

David Louis: I got my first job in radio around 1974 doing everything, including voice overs, writing commercials, and learning what to do in terms of production from some very talented people.

Before long, I left KEZY, my last radio job in Southern California, and went to work managing a production studio that catered to advertising agencies. I started meeting, learning, and dealing with professional female voice talent (and male talent as well) and creative directors. As time went on, I bought the business, and my clients started to rely on me for directorial support. I became less an engineer and more a producer and director.

Debbie Grattan – Professional Female Voice Talent: How has the audio recording business changed since the advent of home recording studios, ISDN, and the phone patch?

David Louis: Technology is what made my move to Hawaii possible. Everything I’m doing here is the same as what I was doing when I was back in LA because everything is digital, everything is Internet.

Debbie Grattan – Professional Female Voice Talent: Are there any downsides?

David Louis: Fifty percent of the concentration for voice talent is now on the technical aspects. It’s distracting and they don’t realize how much it’s affecting their delivery and performance.

Likewise, directing is not as easy when you’re on a phone patch. If everyone else is in a “real” studio (as opposed to voice over talent alone in their own home studio) that’s the worst because I’ll hear this phantom voice in the background saying, “We’re making a couple of changes.” I actually prefer home studios as opposed to talent working in a different recording studio, since the connection is more direct.

Debbie Grattan – Professional Female Voice Talent: Do you handle a session with a male or female voice over talent on a phone patch or ISDN the same as you did when they were in your studio, along with the creative director or ad agency person?

David Louis: Absolutely not. Every studio has a specific sound, and I had the luxury of controlling everything from the room temperature to microphone adjustments. I could save mixer board settings for every male and female voice talent that came into the studio, which is important for continuity.

My standard operating procedure is to play back to talent what we did last time, unless delivery and pacing has changed, joking, ‘This is the guy I need you to do.’ Voice talent gets it, and therein lies the continuity. When talent records on their end, maybe the microphone or EQ isn’t the same, but most of the time we can adjust. Playing those lines back to them really makes a difference. It works every time.

Debbie Grattan – Professional Female Voice Talent: Do you find that end clients are less picky now than they used to be?

David Louis: Absolutely, but I’m speaking from my own experience and the kinds of clients I’ve dealt with. Quality has suffered because it’s not consistent anymore. I’m dealing with male and female voice over talent in different parts of the country and different studio setups, and so it takes a little bit more work on the producing and engineering part to ensure that the continuity is there and everything is sounding as it should for the end client. If the male or female voice over artist can leave thinking they did a great job, then I’ve done my job.

In the second installment, Dave Louis offers more advice for female voice over talent working in a home studio.

Debbie Grattan has been a professional female voice talent for 20+ years, collaborating on thousands of projects and partnering with hundreds of production companies, marketing and advertising firms, commercial voice-over recording studios and corporate/business clients around the United States and throughout the world. Check out her Professional Female Voice Talent Demos and request a Custom Voice Talent Audition for your upcoming project.