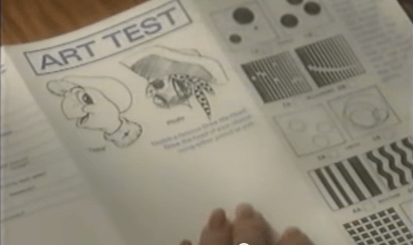 Remember Winky? Winky was just one of many different cute, pencil-drawn animals that my generation may fondly recall appearing in a series of ads in the back of magazines. The ads promised something like:

“If you can draw this, you may have hidden talent as an artist!”

Well, I wasn’t much of an artist back then, but I did my best to copy the drawing, send it for evaluation, and then hope upon hope to win a cash prize.

Of course, what I didn’t understand at my tender age was that the offer was just an advertising gimmick to get people to sign up for a home-study art course. It’s tough to remember a time we were innocent enough to believe there was a simple, predictable path to follow to have a career as an artist.

So I had to smile when I read the title of this blog post: “8 Steps to Becoming a Voice-Over Talent”

Wow! Just follow these eight simple steps and you too can be a professional voice over actor. Hang your shingle, start your business, and begin raking in the dough.

While I respect the author of the article and believe he was genuinely trying to be helpful, I have a few issues (four to be exact) with articles that make voice-over careers sound like a piece of cake.

Breaking topics into a small number of steps has become a very trendy way to catch readers’ attention. They’re also prime for tricking the brain into thinking something tough is actually easy.

Since at least half of the human mind thinks in linear terms, divide and conquer is a strategy the mind embraces. And just because your mind is tricked into thinking something is easy doesn’t mean in reality it is.

A case in point:

Eight easy steps from your couch to the OR, with drill and scalpel in tow!

The brain surgeon article may appear laughable, knowing it takes a heck of a lot more than eight steps to operate inside someone’s skull. But eight steps to becoming a voice-over actor may seem entirely feasible.

I’m not comparing voice-over work to brain surgery (although, let’s face it, the marketing is WAY easier for brain surgeons), but I am pointing out a consistent misconception that views a voice-over career as somehow different, and easier, than many other types of career paths.

Information is often presented as if anyone with a “good speaking voice” could easily and successfully launch a high-paying voice-over career. Lots of voice over workshop advertisements like this one and especially this one hype up the career to sometimes dizzying degrees, leading readers to believe they can jump right in and meet with instant success.

What readers may not realize is many of the hyped-up and easy-step articles are drawing them in with a rickety promise, telling them things they want to hear – and then trying to lure them into voice-over coaching, classes, demo services or other paid offerings.

Issue 4: Becoming vs. Being a Voice-Over Actor

Finally, there’s a massive difference between becoming something and being something. Following all the necessary steps does not MAKE you a professional voice-over actor — or even a good one. While those eight steps may be somewhere on every successful voice talent’s path, there are a countless number of other steps that may or may not need to be taken as well.

Aspiring voice-over actors would be well served in reading articles written by seasoned pros that tell it like it is.

“Hey, this is not an easy profession but if you have some natural talent and are willing to put in the time, energy and money to develop your talent, AND you have the necessary drive and discipline to run your own business successfully (doing everything that entails), then you may have a shot.”

I have read (and written a few) articles that say that, and I appreciate the honesty. More importantly, I hope aspiring voice-over talents take the time to get a balanced view of what is actually involved in ramping up a successful voice-over career.