So, they eventually arrive at the question of how to start “doing” voice over acting as a new part time job or full time career. And after some googling on the subject, a few of them land on my website and recognize me as someone who might be able to answer a few of their voice over acting queries.

Voice Over Acting Isn’t Rocket Science – How Hard Could it Be?

It’s funny how when it comes to most other potentially high-paying professions, people realize they can’t just rush into it and start making gobs of money in a few short months. But, for some reason, people think voice over acting is different. That it’s much easier than “real” professions. I suspect there are folks on the web who make it sound just that easy and are selling services to help people make it happen!

I recently shared some of my personal reflections on how my career as a professional voice over talent got started and has developed over the years into a successful business.

Over the weekend, I came across this article about guaranteeing financial success in your business and it really resonated with me. I think it is spot on in it’s assertion that to “love the journey” of entrepreneurship is the key to guaranteed success. This applies in any entrepreneurial endeavor, not just voice over acting, of course. It’s the journey and not the destination that you’ll be living for the duration. 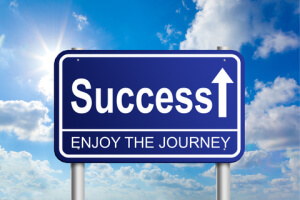 Do we ever really reach the destination?  And when we do, isn’t there just another destination waiting in the wings?  It’s the journey – the day to day – the planning, the execution of the tasks, etc. that is where you spend the vast majority of your time. The destination can change during the course of the journey, so best to be open and joyful in what you’re doing day to day.

I know this is not a new idea, but always bears repeating because it’s so easy to forget and get caught up in thinking “I’ll be happy when I reach what’s at the end of my journey and I’m making lots of money” rather than focusing on finding happiness and contentment all along the way.

Debbie Grattan has been “doing” Voice Over Acting for more than 20 years, completing over 10,000 voiceover projects along her journey while partnering with hundreds of production companies, marketing and advertising firms, commercial voice-over recording studios and corporate/business clients around the United States and abroad. Check out Debbie’s Voice Over Acting Demos and request a Voice Over Services quote for an upcoming project.