The other day, as I was just submitting my last voice over audition for the week, I got an email from an actor friend of mine. He’s someone who I’ve had the pleasure of working with on stage in recent years. He has honed his talents and acting craft over a long time and he’s a very skilled actor.

Of all the folks who’ve asked me about getting into voice over acting, he is one of the few to actually take it from the “just curious” stage to a more serious committed level. He attended some live voice over workshops, researched and bought equipment, set up a good quality studio and conscientiously embarked on the voice over audition road through Pay to Play (P2P) sites and whatever local connections he could establish.

Oh, by the way, he’s married with a teenage daughter, a mortgage and a full-time sales job, so it really takes some drive to set all of this up. He has been steadfastly focused on the dream of eventually switching to a full-time career in voice over acting so that he can finally get paid for doing what he really loves to do. 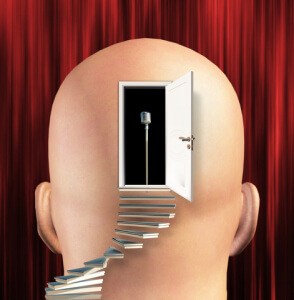 His email to me the other day included a half-dozen voice over audition samples that he’d recorded. He wanted my feedback. He was wondering about what he might be doing wrong and what he could improve on to land more jobs.

While there were a few things I could suggest, overall I felt his auditions were pretty solid. I think that my answer was more disappointing to him than me giving him all of the “reasons” why any particular voice over audition hadn’t been chosen.

Waiting for bookings from P2P sites can be a long, hard wait. It is frustrating to not get the job even though you feel you’ve delivered exactly what was asked of you in the voice over audition. This points to an aspect of voice over acting that can create a lot of mental or emotional pain and suffering for people who may not fully realize the challenges of succeeding in the voice over business.

I recently caught an interview with Jason Bateman on the local NPR station, and there was one particular quote that relates to this topic that stood out:

Wow, good thing I didn’t hear that when I was young and naive and starting out my acting career! Actually, it probably wouldn’t have deterred me back then because I would have thought “But I’m different! That advice doesn’t apply to me!”

Even though Voice Over Acting isn’t quite the same as trying to make it on Broadway or in television or the movies, it IS the same on the level at which Jason Bateman is pointing. And I think that is an extremely challenging idea for most people to come to grips with.

My philosophy on working a successful career in professional voice over is to amass and continue to build my roster of satisfied and ongoing, loyal clients. These are clients who have regular VO work for me which they send to me directly. That means no audition required. This kind of situation usually only comes with time and a lot of hard work and persistence. It also helps to be able to consistently and reliably deliver a high quality product. Building a loyal voice over client base is the ideal and it is 100% worth the effort involved.

Ten years ago, 95% of my voice over work came through this channel. I rarely auditioned for anything (hard to believe I know) yet I was earning a very comfortable full-time income. People would just contact me and hire me to record their script. Alas, those days seem to be long gone now, thanks to the rise of P2P sites and thousands of new voice talent competing for jobs. But I always work to cultivate those kinds of relationships as much as possible.

I still audition A LOT because voice over auditions are 1) a good way to potentially book a little more work each week and 2) a great way to meet new clients who will need my voice over services in the future and hopefully turn into the loyal, long-term clients who hire me without needing me to audition ever again!

Nowadays, with so many casting sites, agencies, and independent casting directors, it’s pretty hard to avoid the audition process, even for seasoned pros. But for me, auditions are a supplement to a lot of other work that comes by way of longer term clients.

Given the fact that auditions are necessary, how does a voice over professional stay in a good place psychologically, with this day-to-day process of constant auditioning, and (let’s face it) seemingly constant rejection?

In Part 2 of this article, I share my 5 Keys to Positive Voice Over Audition Outcomes. Read it now at Voice Over Psychology – Part 2.

Debbie Grattan has been in the voice over acting profession for over 20 years, having collaborated on thousands of projects and partnered with hundreds of production companies, marketing and advertising firms, commercial voice-over recording studios and corporate/business clients around the United States and throughout the world. Check out her Voice Over Demos and request a Custom Voice Over Audition for your upcoming project.