This is Part Two of “Celebs Are Taking Voice Over Jobs Away from the Voice Over Community… Really?!”

Artists can be gifted in many different ways, and can grow and develop outside of their beginning niche. We see crossover all the time with actors cutting an album or singing or playing an instrument in a film. We see current pop stars making their feature film debuts – for example Adam Levine of Maroon 5 and The Voice making his feature film debut in Begin Again (which I’ve not seen, so I have no comment on his acting prowess). 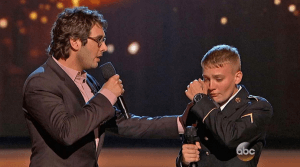 And then you have someone like Josh Groban hosting a TV reality music show. Are there actors who focus on and pursue TV hosting gigs that are up in arms about that? Do they feel he is stealing their hosting gig? He’s a singer… What does he think he’s doing hosting a reality show?!

Pro athletes who have retired from playing are often hired as commentators. Does that make other sports announcers angry? If they have the background, and name recognition to provide a draw for an audience, then why shouldn’t they get the gig? If they can’t cut it, it will be apparent very quickly and the network will let them go.

Michael Strahan has certainly taken a pro football career to whole new heights in broadcasting as co-host of Live with Kelly and Michael every morning. And we’ve certainly seen a round robin of commentators on The View, who are not broadcasters by trade, but actors, comediennes, and personalities that drive a conversation show, just giving their opinions.

Sons and daughters of famous folks (actors, singers, politicians) will occasionally find a springboard with their name and notoriety to help get them in the game, but often they are held to a higher standard, and again, have to prove themselves to maintain their spots. Jenna Bush Hager is a good example. She’s now a regular commentator on the Today show, after a ramp up that wasn’t always stellar. I’m sure there were other broadcasters that would love to have had that spot, but it went to someone who audiences can recognize by her name and connections. Sometimes it’s all about connections, and how we use them.

It irks me that some people think there should be some boundary around what any particular person can do. Why do we have to put everyone in a box and hold them there? There are auto mechanics who are also musicians, lawyers who are also voice over professionals, doctors who are also ballroom dancers. And if they happen to be better than someone else, who calls it their profession, then why shouldn’t they get the gig when opportunities arise?

Same for celebrity actors getting voice over jobs in feature animation projects over unknown voice over actors. The title of the article that prompted this discussion suggests “celebrities are silencing career pros.” Silencing? As if a journeyman VO actor somehow expects to be offered the lead in a feature film instead of (the late) Robin Williams, or Steve Carell, or Cate Blanchett?

I think it is possible… but not very likely. Leads in any motion picture are not up for grabs for the entire acting community. Casting directors are not throwing out an open call for these roles. And those actors cast for their talent and name value, in my opinion, are definitely not stealing work from other qualified candidates. They are actors who have reached a level of success where they have more clout, and in turn, more choices. They are rewarded by being on the inside track.

In my book, there is no rule that says what is appropriate or accepted for anyone to do, regardless of their background, training, or position. There is room for everyone. The attitude that somehow voice over jobs are being “stolen” from VO actors (by other, presumably better actors) is something one can dwell on, or complain about, but for me personally, it just doesn’t even enter my mind as something useful to think about.

I prefer to focus on gratitude for the work I have, the voice over clients who continue to hire me, and new work that continues to cross my path. It’s all about perspective. We all have the right to choose how we see it. I’m not blind. But I choose to focus on the good… and then more good follows.