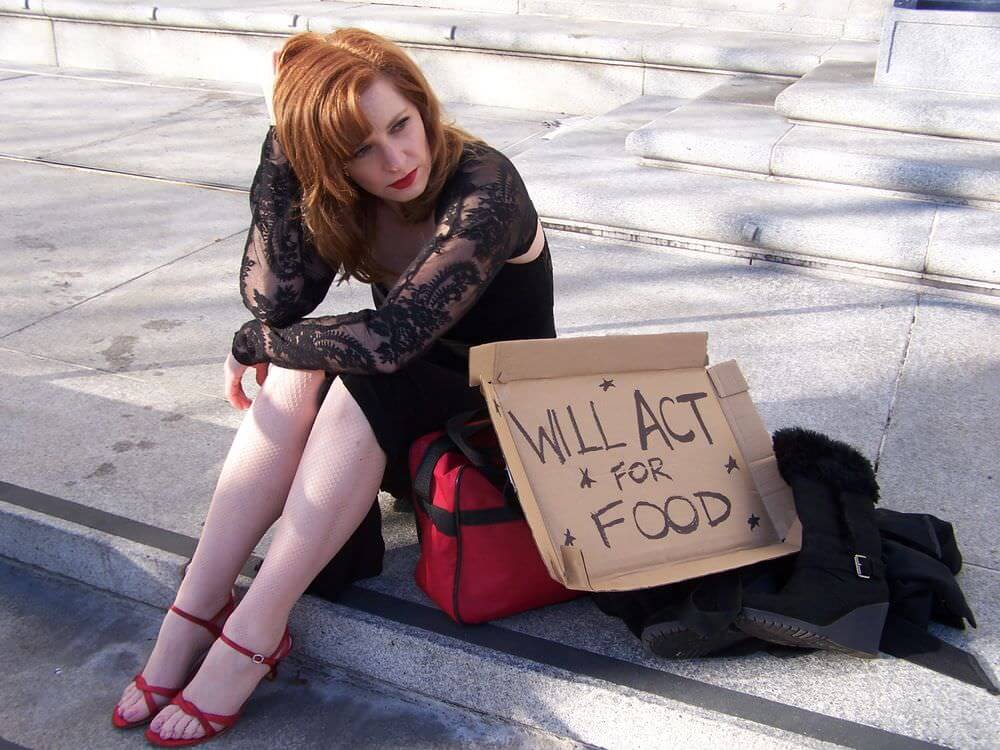 If You MUST Act, Do it For the Right Reasons

For anyone who gets into acting for egoic reasons, to feel special, famous, have adoring fans, etc… This truth is a harsh wake-up call. If you’re in it to be rich and famous, you’re likely in it for the wrong reason and it’s probably going to be a very painful ride sooner or later. Even if you have a lucky break early in your career, it is extremely difficult to sustain a level of success without a deep love FOR and desire to BE an actor.

The unemployment rate for actors, according to the Actor’s Equity Association hovers around 90%. I’ve heard the stat for many years that at any given time, only 3% of actors are actually working (in paid acting jobs).

The United States Department of Labor Bureau of Labor Statistics recently came out with a report that stated that actors “endure long periods of unemployment, intense competition for roles, and frequent rejections in auditions.” — Unemployment is a Lifestyle For Actors and Now Many Others Too

At best, most actors scramble from audition to audition, add a few bookings to their resume, and end up with barely enough cash from their acting jobs to pay their rent and other living expenses. Most have to take on other jobs just to make ends meet. And the pursuit of the next gig is relentless. It’s always about the next gig, the next paycheck, the next chance to show what you can do.

Even if a stage actor reaches their goal of making it to Broadway, the cost of living in New York City is very challenging if you’re trying to make ends meet on an actor’s salary. A typical Broadway contract for a non-star ensemble role could be $1700 – $2000/week. And just a month’s rent in NYC could take 1-2 week’s pay!

Of course, the reward of getting to act in front of a huge live audience or in a movie is the prize that everyone is chasing. Some of my experiences on stage are among the most happy and memorable moments of my life. But, these types of peak experiences come at a very high price.

Life as a working actor of any type demands a strong will and the ability to be able to roll with the ebbs and flows of an inherently unstable vocation. It requires not only the talent and creativity to understand how to interpret words on a page in any given context, but also tremendous perseverance, tenacity, strength, flexibility, patience, finesse and business sense to find and pursue the actual work.

Given it’s inherent instability, a career as a working actor is one that most people are probably not cut out for. As a professional voice actor, when you’re no longer driven by the next audition or booking, when the marketing, website maintenance, blogging, networking, cold calling and other chores to stay in the game become cumbersome, then maybe it’s time to re-assess goals and make sure it’s still something you want to do.

I’m sure the Tony Award winners from this year’s show are still basking in the glory of being awarded “best” for the season. But even for each of them, the show will eventually close and it will be time to look for the next gig. Ah, the life of an actor!

Photo Credit: Will Act for Food is a photo essay collaboration between Cameron Stiehl and photographer, Ana Delao. Set in and around San Francisco’s Civic Center, this collection of photos shows the current state of the arts in America where many artists either work at corporate day jobs, relegating their passion to hobby status, or face poverty. Please visit http://www.cameronstiehl.com for more information.