It never really gets old. As a voice over professional, when you hear your voice on a commercial spot, or a promo, or some animated project on TV or radio, it is always a bit of a treat.

It’s not quite like being a pop star and hearing your song played on the radio, but it’s still pretty cool.

These days, most of my commercial voice overs are for regional and local markets, so my clients are often in locations that are well outside of my viewing/listening range. Unless I ask for a final copy, I may never actually get to see or hear the finished spot.

Fortunately, there is one big exception.

A few years ago, I was lucky to “accidentally” fall into a niche in the TV market for children’s toys. The success of one particular toy was unprecedented, as far as “sold on TV” products go. It actually became the number one selling children’s toy for infomercials and direct response ads, selling over eight million units in just one month in 2010. 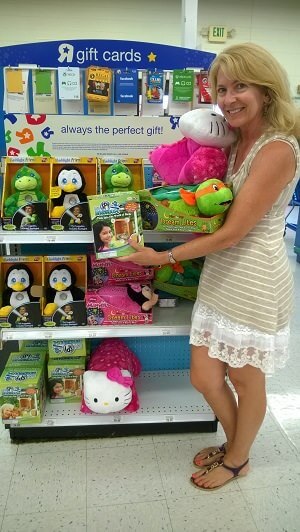 A couple of months ago, I was doing some birthday shopping for my son at the local ToysRUs Store. While we were standing near the checkout counter, I noticed an end cap with a variety of kids’ toys that had formerly only been sold on TV, but were now making their way into the retail market.

I looked closer, and realized that every toy on the shelf was a product that I had done a voiceover for! What a hoot! I had my daughter snap a photo with her cell phone, just so that I could document the event. Toys pictured include: Flashlight Friends, My Spy Birdhouse, Dream Lites and Pillow Pets.

Later that same day, we were in Walmart, and in one of the aisles near the checkout section, I spotted a cart full of kids’ toys being readied to go out into the store.

Again, I see an entirely different set of infomercial type products from the ToysRUs group which also share the commonality of my voice on all of their direct response TV campaigns!

Let Your Voice Over Niche Find You

I never set out to be the voice of children’s toys. It just kind of happened. I think that is often how we discover our unique areas of specialty in voice over.

It’s pretty amazing where that one children’s toy gig has led me. I’ll admit it’s a far cry from the Shakespeare and Greek Tragedies I acted in as a college drama major!

I am extremely grateful for the opportunities that have come my way with these products, and especially to the select group of clients who have hired me over the years for all of the infomercial and direct response marketing projects. Without your trust, opportunities and support, I would have never discovered this unique area of specialty. Thank you!!

Check out this playlist below showing many of my other infomercial and direct response voice overs for children’s toys. Have you purchased any of these for your children or relatives?

What is Your Accidental Voice Over Niche?

If you make your living as a voiceover professional, do you find that you have one particular niche in which you are regarded as the pinnacle voice choice? Did you intentionally set out to do that or did it just kinda happen?

Or if you are someone who hires VO talent, do you pay attention to how well-known a particular voice might be in any particular market niche, and does that have any bearing on which voice over talent you ultimately choose to hire when you create something that falls within the same niche?