Despite spending much of my work day seemingly cloistered from the world in my studio, I still find myself  keeping up with some of the latest trends. That’s especially true when I land voice over acting jobs for new computer technologies and anything that involves rolling out, as long as the “rolling out” comes with audio.

One of those recent rolling-outs was for a client promoting magnet schools. I’ve done radio and tv commercial voice overs for charter and magnet schools before and I was, as usual, focused on reading the script in a way that would get the client’s message across.

View one of my recent TV Commercial Voice Overs for CREC Magnet Schools above or click here if you’re not able to see the embedded video.

Then ‘ding!” — a light went on in my head, making the connection to magnet schools and my two school-age children.

I got what a magnet school is – and I immediately wanted to know more. I’ve seen magnet schools in our area in Indiana/Michigan for both elementary and high school students. There are high-school magnets for engineering, fine arts and even with international baccalaureate programs.

My brain burst with a flurry of questions: How prevalent are magnet schools across the country? Are there only a small variety in certain areas or a large variety from coast to coast? Are they a new trend or a long-time movement I just missed?

I was also curious if parents with children in magnet schools saw their children reaping the benefits the schools promised, and if younger students actually attended classes at the local college or institution affiliated with the magnet school.

Magnet Schools in a Nutshell

A quick glance at a 2012 U.S. Department of Education chart, showed me there were more than 2,700 magnet schools across the nation, pretty much in every state. I learned that magnet schools, which are free public schools headed by school districts, offer a slew of opportunities. And yes, some hold classes on college campuses.

Some programs stick with the science, technology and academic subjects while others focus on visual and performing arts. Still others focus on specific learning approaches, such as the international baccalaureate programs.

Now the big question: Did they actually benefit students? Here, a resounding “yes” came from a study published in the Educational Leadership journal. The study found that magnet school students perform better academically than peers attending other school types. Additional advantages pointed out by the DOE included preparing students for a specific career path and higher learning while creating a diverse community of students who share the same interests and goals.

My seventh-grade daughter, who has already shown an aptitude for singing, acting and performing (including doing a few tv commercial voice overs along the way), may be an ideal candidate for a fine arts magnet school. And we happen to have one in the vicinity!  In fact, we’re going to see a live show there this weekend!

As a mother and connected member of the community, I truly enjoy being able to lend my voice talent to something that has a strong connection to me. Hopefully while talking to my own demographic, I can communicate through my voice over acting exceedingly well to that spectrum of the population, thereby giving magnet schools their just due.

Debbie Grattan has been recording TV Commercial Voice Overs for more than 20 years, with over 10,000 projects to her credit while partnering with hundreds of production companies, marketing and advertising firms, commercial voiceover recording studios and corporate/business clients around the United States and abroad. Check out her TV Commercial Voice Overs Samples and request a Complimentary Custom Audition for an upcoming project. 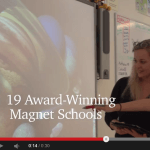