The battle of the sexes definitely rolls over into the voice-over arena these days. Actually, there’s not really a battle going on, but rather a very good question:

Is it better for your company or client to hire male or female voice-over talent?

Like most things in life, there is no cut-and-dried, right or wrong answer. But my experience as a professional female voice-over talent for a couple of decades has taught me that companies can uncover the best answer for their specific needs by keeping a few key points in mind.

The historical trend has been to go with male voices for male-dominated fields and audiences, and female voices for those that contain more women. But this is one area where history is not necessarily repeating itself.

Many of my clients have contacted me to deliver narration voice-over services in industries that may not seem like the typical place to find female voice-over talent. These include Raytheon Missiles, the U.S. Army and a collection of mining, engineering, medical and financial fields. Inserting a woman’s voice into male-dominated territory (or the other way around) can give the select audience an unexpected twist from what they may have been conditioned to expect.

This unexpected twist is what can get the audience to perk up, and really listen.

However, there may be areas where an unexpected twist is NOT all that welcoming. While a female voice-over talent talking about missiles and mining may work, a male voice telling women about the latest nail polish or feminine hygiene products is almost definitely not going to pan out well.

A study published in The Journal of Advertising examined the implications of using male and female voices in commercials. The study found that the gender of the voice-over didn’t matter for products that were either neutral, or geared toward men.

But, the gender of the voice-over mattered greatly when it came to female-oriented products. The chatty nature of a woman sharing something she likes with another woman seems very natural, and is used often in advertising.

Who do you trust? Did you know that women’s voices are generally perceived as more trustworthy than males? 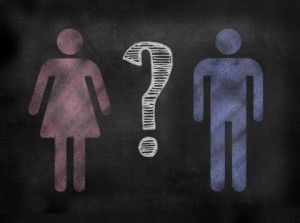 Female voices typically sound less aggressive, softer and more easygoing – which makes people more likely to trust them. An interesting experiment headed by University of Glasgow psychologist Phil McAleer found that the trust happens in an instant, and even from a single word.

McAleer recorded 64 different voices, then had 320 different people listen to the voices simply saying the word, “Hello.” Listeners found the lowest-pitched voices of the males the least trustworthy.

Female and higher-pitched male voices were deemed the most trustworthy.

Inflection also mattered. The most trustworthy female voices were those that dropped their voice at the end of phrase, which McAleer said shows a degree of certainty that instills trust in the listener.

Which Gender of Voice-Over Talent Works Best For Your Company, Product or Message?

Male or female, the bottom line is what ultimately works best for your company and brand. Companies that are on the cutting-edge of creativity and innovation may want to mix it up and go against the norm, whatever the norm may be. More conservative brands, on the other hand, may want to stick with what their industry and audience expects.

I sometimes get calls from production companies that say they have “go-to” male voice-over talent that they know and use frequently, but have not been able to find a good female voice-over talent. This is always a bit surprising to me, since I know so many good women voice-over artists. Just doing a simple search turns up pages of terrifically talented female VO’s. Why would a producer not have at least one on his or her roster?

Perhaps it has more to do with the producer’s client requests, and some old-fashioned standard around the male domination in the voice-over field.

That male domination, however, is shifting. A 2018 report on voice over trends noted the number of job postings seeking female voice over artists is growing more rapidly than the rate of postings for male voices.

Much of the shift can be attributed to large female-oriented audiences more inclined to trust and listen to females they perceive to be “just like them.”

But trends aren’t written in stone, and stereotypes are being discarded all the time. I saw a TV spot just this week with a “Dad” doing the laundry and talking about his choice for laundry soap!

As long as a voice-over artist is good at what she does, professional in her business approach, easily accessible, reliable, and attentive to customer service, she should be able to attract business from all types of industries.

If you’d like read more on this topic, you can also check out this article I wrote back in January 2012.

Please share your experiences… Have you ever been able to shake things up and try a different gender approach with your clients and/or audience?